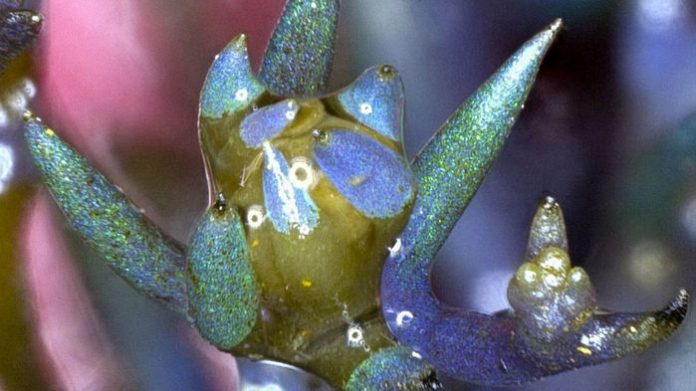 CAMBRIDGE, U.K.—At low tide, the brown seaweed filling tide pools along the coasts of Cornwall and Devon counties in the United Kingdom does not look like much. But when the tidewaters rise to cover it, this “rainbow wrack” shimmers in dazzling blues and greens (above). Now, scientists have discovered just how the seaweed gets its shimmer.

By looking at frozen samples under an electron microscope, scientists were able to zero in on nanostructures in the alga’s cells that are about 1000 times smaller than a human hair is thick. They found that Cystoseira tamariscifolia produces the blue and green colors in its cells by packing tiny spheres of oil closely together in a regular way, they reported here at the Living Light conference and in a paper in Science Advances this week. The structure resembles that of tightly packed silica spheres in opal, which diffract light and produce the gemstone’s coveted color.

But the function of these opallike photonic crystals is still not clear. One clue: Under intense light, the ordered structure goes into a disordered state and the colors quickly fade. But when dark conditions return, so do the colors. That might help the plant deal with low-light conditions, say the scientists. In high tide, when less light reaches the alga, the crystals may capture some of the sunlight and pass it on to the surrounding chloroplasts for photosynthesis.

Atmospheric changes leave their mark in tree rings From the eruption of the Timanfaya volcano in the Canary Islands to the coniferous forests in...

Editor - 24th January 2019
0
A handheld printer for the face and hands is on show at the CES tech expo in Las Vegas.