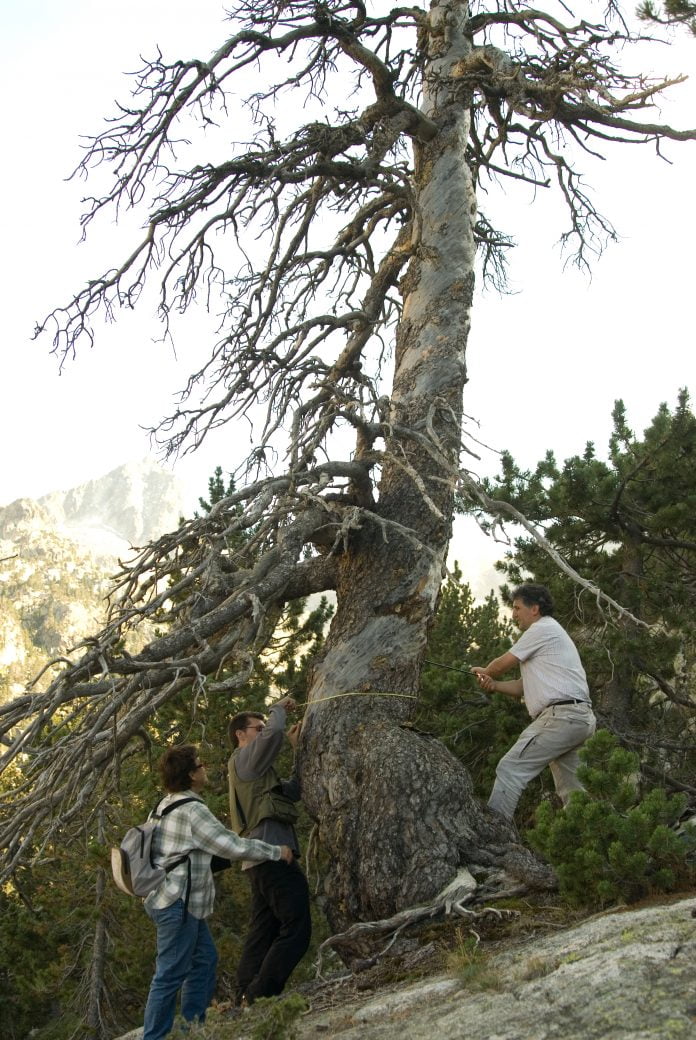 A new study shows the chemical register of climate change and global episodes such as volcanic eruptions in high-mountain centennial forests in the Iberian Peninsula (Spain).

In September 1730, a large eruption in the Timanfaya volcano (Canary Islands, Spain) completely changed the morphology of Lanzarote. Atmospheric changes that caused volcanic eruptions centuries ago, such as the one in Timanfaya or the Tambora volcano (Indonesia) -which hid the sunlight for months-, had an impact on high-mountain centennial forests in the Iberian Peninsula, as stated in an article published in the journal Science of the Total Environment in which the lecturer Emilia Gutiérrez, from the Faculty of Biology of the University of Barcelona, has taken part.

The chemical traces from the released gases into the atmosphere by these volcanic eruptions can be now identified in the oldest coniferous Pyrenean forests, according to the study. In particular, eruptions such the Timanfaya’s in Lanzarote ─one of the strongest in the country due its duration until 1736 and the amount of thrown material─ and Tambora’s ─one of the biggest volcanic episodes, which led to a “year without summer” in 1816─ released big amounts of iron that altered the chemical composition of the annual Pyrenean tree rings. According to this article, the study of the records of tree growth rings (dendrochronology) could help to see the frequency and intensity of the volcanic phenomena in modern times.

Studying the registers of atmospheric changes in tree rings

The new study, led by the expert Andrea Hevia, researcher at CETEMAS-Asturias, analysed temporary changes in the chemical composition of annual growth tree rings in the Pyrenees, in particular those in subalpine black pine (Pinus uncinata) forests in the national parks in Ordesa and Monte Perdido, and Aigüestortes and Estany de Sant Maurici. The study has the participation of Julio Camarero (Pyrenean Institute of Ecology -Zaragoza, IPE-CSIC), Raúl Sánchez Salguero (University Pablo de Olavide, Seville), and Allan Buras (Technical University of Munich, Germany), among other experts.

For the first time, this study allowed researchers to analyse the effects of the climate change on the forest nutrient cycles, and states that Pyrenean forests can register these episodes chemical mark at a global scale (for instance, volcanic eruptions in remote areas) and the effects of gas emissions into the atmosphere since the Industrial Revolution.

According to the lecturer Emilia Gutiérrez, from the Department of Evolutionary Biology, Ecology and Environmental Sciences of the UB, “the data from these trees that grow in heights over 2,000 metres represents the global changes, since their growth is not influenced by the effects of the local human activity (wood cutting, industry).”

The experts applied a new non-destructive methodology that analyses atmospheric changes from the last seven hundred years ─with a yearly resolution and seasonal resolution─ out of the analysis of the tree growth rings. Among other results, the study shows an increase of content in elements such as phosphorus, sulphur, and chlorine since 1850, when the Industrial Revolution began taking place in Europe. Also, other essential chemical elements in the development of wood were analysed, such as calcium. “The fixation of these elements in growth rings in wood was favoured by the global rise of temperatures,” says the researcher Andrea Hevia.

According to the studio, trees that grow in areas with alkaline floors (such as part of the National Park of Ordesa and Monte Perdido) could have a bigger ability to reduce global acidification phenomena, contrary to what was seen in areas with acid floors (such as the National Park in Aigüestortes and Estany de Sant Maurici). “The increase of sulphates and nitrate emissions into the atmosphere can limit the fixation into the floor and the tree absorption of essential elements such as calcium, magnesium or manganese, among others, which are essential for forest growth and development,” says the lecturer Emilia Gutiérrez.

The study of the effects of climate change in this area and historical variation of chemical elements in trees can highly contribute to discover the potential effects that could stand many of the coniferous forests in the 21st century, according to the authors.

Editor - 24th January 2019
0
A handheld printer for the face and hands is on show at the CES tech expo in Las Vegas.